How to wear Braided belts and ropes | Everything About Fashion 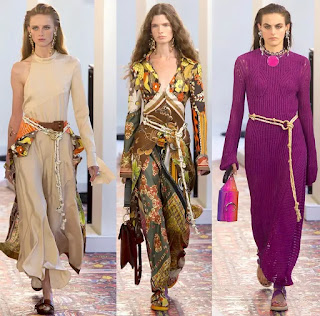 For many centuries, the belt was among the first items of clothing. Almost all nations have a belt in their national costumes. They were not simply used to support certain pieces of clothing or for decoration. The belt was important in traditional folk rituals, especially for the Eastern Slavs, whose belt was the main component of both men’s and women’s clothing. The belt served as a talisman of its owner or owner.

In Russia, parting with a belt against their will was a terrible disaster or even a punishment for any person. It was believed that the belt not only protects the owner, but also gives him physical strength. Belts were different: woven, woven from threads or even bast. They were woven from woolen and linen threads.

Photo from above – Altuzarra
Photo below – Altuzarra and Brock Collection

The woven belt and now remains only a fashion object. Especially expressive and stylish look woven belts using macrame technique or made of rope with many knots. Due to the fact that fashion seriously turned to things that were made in the simplest form, where one can clearly see traces of manual labor, and without special care, in the last spring-summer collections of 2019 the rope belts turned out to be quite remarkable.

Some puzzled about what to make a rope belt, and many women of fashion picked up this tendency and made belts from a clothesline. They look fun and funny. Who is unfamiliar with macrame technique, now is the time to learn something and make a rope belt yourself. There are different ways of weaving.

Luxury accessories are obtained using a crochet hook, there is knitting on a fork, macrame, weaving on bobbins, and there is just knitting without using any special devices – knitting on fingers, and there can be several ways. Therefore, you have the opportunity to express your imagination and weave a rope belt to your favorite dress in an exciting and quite simple work.

You can see the new images with rope belts, which designers have prepared for us in the season 2019. The belt can be woven from woolen, nylon, linen, cotton yarn, rope, braid, ribbons, leather, and decorated with pompons and tassels.

Long bound or woven belts had a certain meaning, symbolizing the tireless adherence to specific rules. By the way, the nodes on the belt and their number also have a secret meaning.

But everything that concerns the belt, both in the Bible and in the popular traditions, is the desire for piety, innocence, faithfulness and other good intentions. Make your belt and let it be for you a symbol of modesty, chastity, protection and decoration.

2 Photo by Isabel Marant and Frame